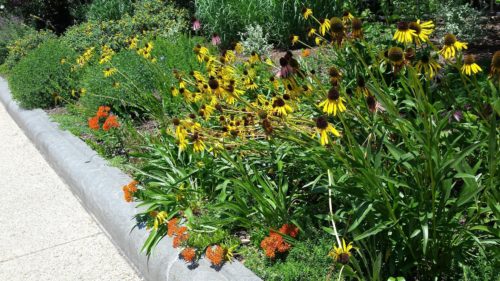 And it’s summer again. It’s been awhile, but hey, sometimes life has that effect.  But hey all three of us are doing well, and we have a home of our own now, so those are happy things.

Despite all the big things, there have also been projects.  We’ve got a garden going, there will likely be canning and freezing for fruit and veggies this year and there’s been sewing too.  And even a little bit of knitting. 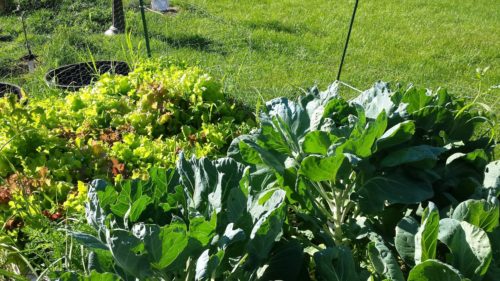 So first, the garden.  After we bought our house we put in 4 raised beds, which has been amazingly helpful.  Around here the dirt has so much clay in it it’s an impressive bright orange (you could make pots out of the topsoil around here) and is also full of large (sometimes melon sized) hunks of sparkly pink quartz.  So being able to garden in actual light fluffy dirt has been a huge difference.  I may even get cucumbers this year (fingers crossed)! 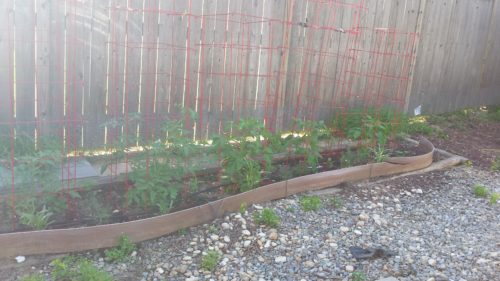 In addition to the raised beds we made some changes to the landscaping in the backyard.  The previous residents had a lot of hydrangeas, knock out roses and other perennials.  For the most part they were pretty but there were a bunch of issues since they took up a bunch of the yard and a lot of them were incredibly spiky and shedding spiky thorns everywhere (one bunch looked like they were ready to defend a magical fairy tale castle they were so big and spiky).  So with a lot of work (largely Patrick being impressive with a saw, heavy gloves and lawn trimming bags…) we swapped those for a mix of tomatoes, blackberries, raspberries, blueberries, rhubarb, herbs of various kinds, strawberries and currants.  So now they’re manageable, much less spiky (blackberries are still a little spiky), and will produce tasty food.

The other big news is I finally got to plant my trees!  We now have two apple trees and a plum tree which will hopefully grow into awesome fruit trees (of a reasonable size…).  Overall things are going really well despite doing a lot of work in a short time.  I think several years of gardening practice is paying off.  It’ll be a couple years before we get much fruit (just strawberries this year I think) but hopefully it will be successful.

There’s still more projects left to do (of course).  Next year for example we want to try onions too and I want to put asparagus around the back of the shed (it’s sunny back there) and add shallots and bunching onions to the multiplier onions for scallion production.  Oh and since other previously challenging veggies are doing pretty well, I want to try peas next year too.

So far we’ve gotten lots of lettuce and radishes and we just got the first batch of beans, so I’d say all those are successful.  And it looks like we might get hot peppers and cucumbers soon too so that is awesome.

For sewing I have made a lot of curtains.  A. Lot. of. Curtains.  But hey, that’s part of moving.  The people we bought the house from left curtains (included curtains?) as part of the house.  But…they were roman shades, with cords, or polyester Target curtains.  And some were really dark navy and they had dogs, and they were kind of funky…  So, lots of new curtains were needed.

So I made curtains for 8 windows, which ended up being at least 14 curtains, with a bunch of them being lined curtains too.  On the upside, I definitely learned from my last make-all-the-curtains experience and these are much nicer.  I had originally planned to but grommets in them, but I ended up doing rod pockets instead.  I decided they’d give better coverage that way and the grommets that were available were kind of sad looking plastic and it is really annoying to do nice custom sewing on beautiful fabric and have to finish it with ugly plastic hardware (that usually ends up falling apart).  But on the upside we now have nice looking (and baby safe) curtains and sheers for all the rooms (haven’t hung up all the sheers yet since first we need to hang double curtain rods…but that’s another project…and hey the curtains are all up!).

So that was a lot of sewing, yeah it was all straight lines but I still had to cut them all out (precisely) and match them with the backing (precisely) and sew very straight seems (precisely) so it was a major project.  I’m very happy with how they turned out though.

So now that that’s done I can start other sewing projects.  My body is more or less a consistent size/shape again (and I hit my goal on that too, yay!) so I can make my 4th of July dress this year.  And yeah, it’s totally one of the dresses I mentioned in the previous post, not much clothing sewing ended up happening last year.  Size changes were too rapid and life was too intense.  But hey, it means I have awesome fabric waiting for me to make something fun with it.  I’m starting with the green dress (since I had that one cut out).  I re-cut it to my current size/shape using my old traced patterns.  I should remeasure and adjust my patterns but…life is busy…and the fit is close enough it works based on my clothes I made before.  I have most of the bodice sewn up, so I just need to add the pockets, sew and attach the skirt, hem and do the buttons (sigh, buttons…).   I think I can do that by the 4th of July.

I also got some fabric panels for fun projects. I’ve always wanted to do those.  I have a cloth book for the tiny sir which matches the curtains I made him, I have a panel with a cute US map for a play mat and I have an advent calendar.  I think a quilted/sewn advent calendar sounds like a great plan since not only does it look fun to make but it will be easy to set up and store (yay unbreakable, roll-able fabric!).

I’m also planning to sew some shirts for the various Patricks.  I have nice fabric waiting for that too, and tiny person clothes, because those sound fun.

I also have done some knitting, mostly baby socks since it was really hard/impossible to find socks that were comfortable for the tiny son’s feet.  I’m also making slow progress on a pair for me and re-knitting the top of my yellow hat so hopefully it stops sliding off the top of my head (I think I need at least one more repeat before doing the decreases…we’ll see).

So yeah, there are definitely still projects and this is an excellent thing.