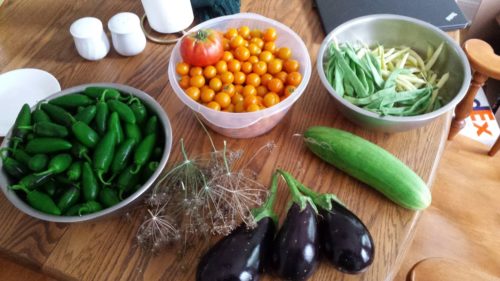 So the last couple of days included a lot of rain, as in at least 4 inches of it (most of it in a couple hours). In order to deal with all that rain a lot of stuff had to happen really fast (largely because the previous owner’s drainage solution did not successfully drain since it had gotten blocked at some point).  Luckily the grown up Patrick is awesome and dug it up really fast, fixed it, re arranged it on the path he built as an alternative drain and bailed out the basement window well area.  So cleaning up involved a few towels not buckets.  Which is a massive relief, flooded basements are awful.

So everyone needed some recovery time after that.

So planning was something relaxing to do.  So there was some garden planning and food preservation planning and sewing planning…  I have the layout worked out for how I want to do the garden beds next year.  I think it’ll fix the things that didn’t work as well this year (like fights between green peppers and cucumbers…) so I’m looking forward to trying that out next year.  Also, it turns out that half of the flower bed on the property line is ours (it’s all orange day lilies on both sides).  Looking at it I knew it was ours officially, but it was all the same flowers on both sides so I thought maybe the neighbors just looked at it all as their flower bed.  Since I’m not really an orange day lily sort of person I’m glad half is ours.

I’m going to plant Cheyenne Spirit coneflowers instead.  There’s a lot to like.  They’re about the same height as the day lilies, they will fill the bed in summer, they bloom all summer without needing deadheading, they’re safe for kids, they feed the birds and while the plants live about 3-5 years, they reseed themselves in the bed.  They’re also a nice mix of colors.  So I think they’ll be great.  And that part of the yard is sunny and on a slope so I think it’ll drain pretty well.  Also, since they bloom in summer I can have tulips and daffodils mixed in too. 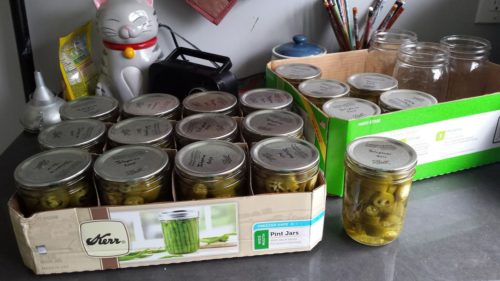 Also on the topic of gardens, I think I’m going to freeze and dehydrate this week’s garden produce.  Since I’ve got 18 pints of jalapenos I think freezing the next batch is a good plan, and we can freeze some beans and eggplant and dehydrate the cherry tomatoes.  The big ones are starting to ripen now so maybe next week I can can some tomatoes.  I’m going to try crushed tomatoes this year. 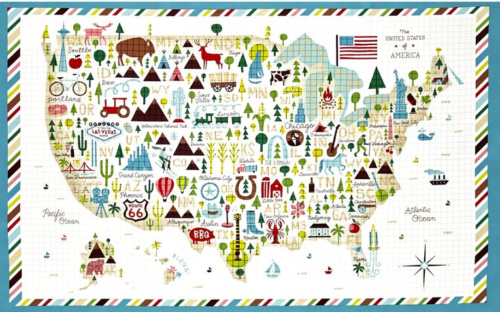 I also finished the tiny Patrick’s play mat with the map of the US.  I realized that I don’t have to put a binding on it (and I think it turned out nicely without one) and he enjoys it.  He likes to point at all the different shapes.  It’s also fun to tell him stories about all the different places.

Next up is Christmas stockings.  I’ve got the tiny Patrick’s all cut out and I started sewing it together.  So far so good!