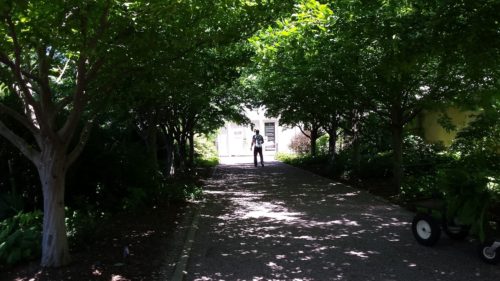 So…now that I have long term plans figured out (at least a little bit) there’s the chance to think about what I want to do this weekend.

First I want to bake bread.  We’re on the last loaf of Costco bread and I like mine better so it’s time to bake more.  Maybe I’ll also fulfill my months long goal of making cookies.  It’s always possible. 🙂  And while we’re on the subject of wishlist baking, I’d also like to make waffles because it’s been awhile and they’re great.

For cooking I’d like to do something in the slow cooker.  I think there’s a pork shoulder lurking in the freezer and pulled pork sounds like a good lunch option…  And there’s another project too, pre-chopping veggies and meat and things for easier dinner preparation…  That’ll happen when there’s time and we next go to the Costco probably.

The garden also needs some attention this weekend.  There’s weeding to do and the peppers need stakes to stay upright.  There will also be beans to pick (and soon peppers, cucumbers and tomatoes with any luck!).

And I want to finish my dress, it just needs buttons and button holes so I’m almost done.  If I can finish that it would also be nice to do one of the small fabric panel projects like maybe the soft book for the tiny Patrick.  Of course it depends on time. 🙂

In terms of general projects, hopefully I’ll finally get the brakes fixed on my bike (either by following the guidance of the Internet or bribing the grown up Patrick, we’ll see…).  I’d also like to sort the kitchen, but that depends on general motivation and how energetic/tired everyone is.

And I’d like to go to the big park with the Patricks, it’s got a carousel and a train and a butterfly garden and is huge.  I think that would be relaxing and fun (it’s really close so it’d be easy to get to).  And maybe I could go to the farmer’s market, that could be fun.  If I got my bike brakes fixed or if the Patricks want to go too… Or maybe go to the thrift stores?  Those are fun.