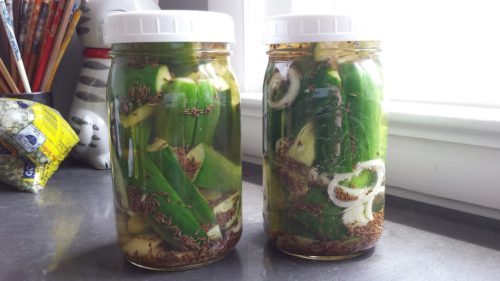 So it’s now very much summer, warm humid air, weeds and the garden growing like crazy, lots of projects to do, food preservation questions to consider…  Yep, definitely summer.  I have gotten a bunch of things done though!  First, I finished the soft book from the fabric panel, which ended up turning out very nicely.  It’s cute and using the fluffy batting made it really nice and cuddly.  The tiny Patrick approves.

I also finished my 4th of July dress and it turned out great.  The pockets fit in nicely and the fit is perfect (extra yay!).  And I have officially decided that the answer is to sew the facing down under the collar (you can’t see the line of stitching that way).  I was really careful to do everything right with the facing, even grading the seam allowances and using a pinking shears (which was tricky and annoying!) and it still wouldn’t lay flat.  I think it’s just the result of the shape of my back/shoulders.  So!  It got sewn down and that’s what I’ll do in the future.  It looks fine that way.

I also started the advent calendar.  That’s been a fun project, just enough detail to be interesting without being fiddly.  I would be working on that now, but there’s a fluffy white cat sleeping on it.  Also, it looks like the dense cotton batting was the right choice for that one.  It gives it more of a tapestry type weight that I think will help it hang nicely.  I haven’t decided if I’m going to use a dowel or rings to hang it….Probably the dowel since I think that will make it straighter, the only downside is then I’ll have to store said dowel, but if I roll the advent calendar around it, that shouldn’t be too bad.

I also did my lavender packets!   I picked some lavender flowers (a nice little mini bouquet) which was enough for 3 layers in the dehydrator without crowding them.  I set it to 95 degrees for about 2 hours and they came out nice and dry.  It also made the house smell pretty nice!  Then I cut up some of the smaller bits of fabric from my grandma and made 4 little ‘pillows’ each about the size of my hand.  I thought about adding stuffing too, but I decided flat packets would do a better job at letting the scent into the surrounding area and not take up as much space in the closet/drawer/etc.  I also only used the flowers and not the stems.  The stems also have scent but a lot less and the flowers were enough to give each packet plenty of lavender.  They’re also crazy strong.  They’re sitting on our kitchen table now and you can smell them from the next room over.  So maybe that will be enough to defeat the closet that’s permeated with 50+ years of shampoo and fabric softener… 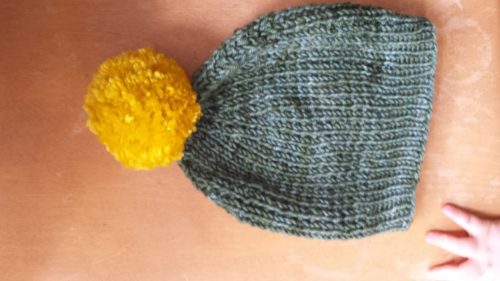 I also finished knitting the tiny Patrick’s new fall/winter hat.  I did “Bumble” by Tin Can Knits.  It’s very cute but I think the stitch work is a little open for being a nice heavy duty winter hat.  Then again a toddler probably isn’t going to be outside outside much in really cold weather so maybe this is the best way to do it?  The best part is the pompom.  I remember making one at some point (I don’t know when, like childhood sometime) and it turning out sad and not fluffy so I got a proper pompom maker (they’re like $5) and put a ton of yarn (as much as I could fit!) into it and it turned out great!  It’s super soft and fluffy.  So I’m really happy about that.  Also I did extra repeats so it covers his ears properly!

I’m still working on re-knitting the top of my Apple Pie hat.  I think I did an extra repeat the first time but didn’t write it down, so when I made my replacement I just did the recommended length.  It spent all winter sliding off my head, which was massively annoying.  So!  I cut the yarn at the top and ripped back to wear the decreases started (since there’s only 1 spot in the pattern with purl stitches and the first decrease is purl-two-together this was easier than expected…).  So I dug out the tiny ball of extra yarn and am now knitting an extra repeat before doing the decreases.  Hopefully it will stay on this time around!

The garden has also been busy.  We’ve picked lots and lots of beans so far (and I have lots more to pick today!).  These are yellow beans (my favorite) and Romano beans (Patrick’s favorite).  I think I might also plant some purple beans so we have some regular green beans around too.  Pole beans was definitely the way to go with the Romano beans, they produce so much better than the bush bean version.

We’ve also got our first round of peppers.  I don’t think the bell peppers liked their proximity to the cucumbers or the weather but we’re still getting some.  The jalapenos are doing great.  I’m hoping to freeze a bunch of those and then start pickling them.

We’ve also gotten cucumbers!  Yay!  I’ve made two jars of fridge pickles and I’ll still have plenty for cucumber sandwiches this week!  Hopefully they’ll keep going and I’ll be able to can pickles too.

We’ve gotten the first couple tomatoes (the cherry ones) too and there are lots that are almost ready.  I’m planning to dehydrate the cherry ones (I got an egg slicer to hopefully make that more manageable).  I’m also hoping if the full sized ones come through for me this year I can can small batches of crushed tomatoes.  We’ll see…

We might even get a few blackberries to try this year if I manage to beat the birds to them…   (fruit + birds is a challenge I have yet to fully resolve, bird netting has some serious downsides after all)

I also want to make jam, but I’m going to need to get the fruit to do that I think.  Our strawberries are producing enough for snacks (even with squirrel theft) but not jam and we won’t get more than a couple from the rest of the fruit for a year or three.  So jam requires a Costco or farmer’s market visit.  So we’ll see…

Oh and I cleared out the bolting lettuce (and 4 wheelbarrows of weeds from around the yard…) and planted pumpkins and yellow squash.  Hopefully those work out, that would make me happy.

Still though, plenty to do.  Next goals: